Interview with Jillian Goldberg of Guardknox 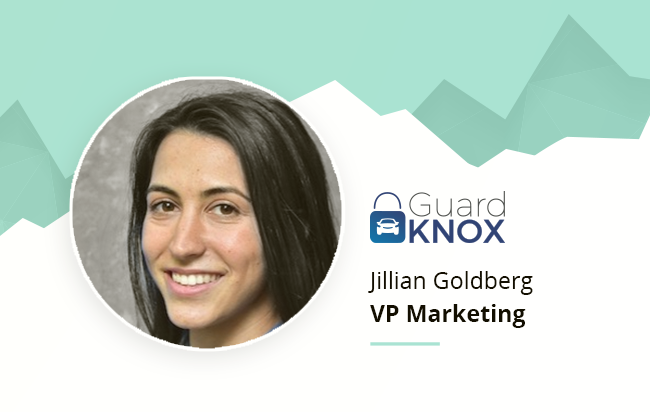 When Jillian Goldberg signed on with GuardKnox in December 2016, she became the first non-technical hire by the automotive cybersecurity startup. Her task was simple. With little budget and limited support, Jillian was charged with positioning the unknown company in front of global automotive manufacturers and suppliers.


Today Jillian manages a strong, agile marketing unit. She has transformed GuardKnox from an unknown startup into a respected thought leader in the automotive industry and has spoken at industry events such as Automobility LA. She is passionate about automotive cybersecurity, which augments safety in the “smallest unit in which the entire family is gathered.”


She can easily talk for hours about the automotive cybersecurity company with roots in the Israeli Air Force, and the way GuardKnox’s patented Service-Oriented Architecture (SOA)  not only makes cars safer, but serves as the foundational layer to allow for added levels of connectivity and personalization within each vehicle.

The GuardKnox job was Jillian’s first professional marketing position. Brand new to marketing, she believes it worked to her advantage. “I didn’t come with pre-conceived notions of what marketing should look like in an organization. I was able to learn on my feet, put myself in the customer’s shoes, and understand the best way to market to them.”


Not only was Jillian new to marketing, but automotive cybersecurity was what they considered to be “blue ocean.” It was a brand new market and there was not a lot of competition, and much of her role in the early days consisted of educating the automotive industry as to why they needed to incorporate deterministic cybersecurity solutions into their vehicles.

Like in many startups, Jillian had to fight for every bit of her marketing budget. As an initial one-woman operation, she turned to several marketing mentors who guided her toward HubSpot, citing its high return on investment.


Working in a niche market, she found the HubSpot platform to be ideal. It provided the CRM she needed, as it helped her manage her database, email nurture campaigns, blogs, website, and sales pipeline. “I’m always talking to people and monitoring for new platforms, but I don’t see the ROI for GuardKnox with anything else at this moment.”


“Comfortable in the Uncomfortable”

Jillian took an unusual career path, one that she credits with helping her deal with dynamic nature associated with an international startup life. After graduating from Tulane with a liberal arts degree, Jillian signed on with Teach for America, a two-year program that "enlists, develops, and mobilizes as many as possible of our nation's most promising future leaders to grow and strengthen the movement for educational equity and excellence." These teachers are placed in inner-city schools, with a majority of these students falling below the poverty line.


She taught physics and chemistry, coached soccer, and worked with over 200 students every day. She was “thrown to the wolves” without the benefit of an education degree (don’t worry she obtained her teaching certification during her first year in the classroom!), an experience she flourished in.


It was this experience that prepared her for life in a startup. The public speaking skills she developed in front of the classroom have served her well when meeting with investors, as did the need to take a complicated topic and break it down into more manageable and understandable parts for her students.


“I think the hardest, most important skill that I learned there was being comfortable in the uncomfortable. It's not something that can be taught. I had to multitask, juggling all these different students’ personalities, and learn how to be a part of a team, which is so crucial in my role today. And I think more than anything, it gave me such a perspective on things. I believe my ability to deal with and handle everything stems from that experience. Even my hardest day at GuardKnox cannot compare to a typical day in the classroom.”

When your alarm rings at 5:30 AM so you can be on a conference call with Japan by 6, and you turn out the lights after your 11 PM conference call with California, it can be tough to find that work-life balance. Jillian, however, takes it all in stride, hitting the gym for her daily workouts.


She’ll often leave the office around 6 or 7, get her workout in and grab dinner, before heading back to the phone for those late-night calls, emails, and everything else on her to-do list. To Jillian, the workouts are “important because it makes me a better boss, employee, colleague. It makes me a better daughter, friend, everything.”


Jillian competes in powerlifting and CrossFit, she was on Israel Ninja Warrior in its first season. To manage her time, she preplans everything, going so far as to lay out the next day’s clothes the night before. But perhaps what keeps her most balanced is this:


“I think the biggest thing is just to be nice to yourself. Not every day is an overwhelming success, not every day or every moment is going to be perfect. But you just do your best with what you have at the time. And that's all that we can ask ourselves.”